The Swans Of Eagle Story

Mute Swans are not indigenous to Idaho but there is a healthy population of them in the greater Boise area. Many, if not most, of these beautiful birds are the offspring and progeny of a mating pair that have used the same nesting area in Eagle, Idaho since 2004.

When the pair first arrived they nested at the bottom of a working gravel pit alongside the Boise River. Ron Sali, the owner of the pit, took nesting material to help the swans build their first home in the hole. In 2006 the pits were allowed to fill with water and the gravel mining ceased. The swans were displaced but  apparently they appreciated Ron's  hospitality as they have returned every year since.

My introduction to the swans of Eagle came in the spring of 2011. Ron Sali had turned the old gravel pits on Eagle Island into a wildlife rich habitat with two deep water lakes and named the property Three Rivers Ranch. I had observed waterfowl on and around the lakes from the outside as the ranch was fenced and posted.  One day the gate was open and I ventured up the long driveway to ask permission to shoot photos inside the perimeter. Ron looked me over, checked my credentials, looked at some samples of my work and then, against his better judgement, gave me limited access if I promised to get some shots of the swan family for him. I had never even seen the swans from outside the fence and knew nothing about them. I learned that the swans had produced approximately 70 offspring on the property and were considered members of the family. I was intrigued and accepted the opportunity

All my prior contacts with swans were short and from a distance. Translated that means I knew almost nothing about them. I wanted to get some nice images to complete my part of the bargain so I could pursue other photo opportunities on the property. It wasn't long before these impressive and imposing birds captured my imagination and attention. I did a little Google surfing to understand a few of the birds actions but most of what follows is based on my observations and should not be considered swan fact.

My first visit to the nesting area was on May 10th. Ron had warned me that the male was very protective and could inflict pain if provoked. Over time I learned to recognize the various poses he would adopt as a warning.  I set my tripod up at a respectful distance and watched for several hours. The male clearly defined the edge of his territory and got aggressive if I got closer. I nicknamed him "Sumo Duck" because of the odd plodding walk he adopted when he was trying to intimidate me into moving away. The female would rise every 20 to 30 minutes to shift the position of the eggs in the nest so I was eventually able to get a count. There were 8 eggs and they were HUGE! In my ignorance I wondered how she could fly with all those eggs inside her body. She can't, but they are not all in there at one time. Swans lay eggs at a rate of about one a day and can spend as long as two weeks filling the nest.

I wanted to be there when the cygnets were hatching. Ron, his partner Simone Greear, their family and I would look in on the nest regularly to watch for any signs of activity. Even though the eggs are laid over a period of time, they all hatch in about 24 hours so rapid response is required. I was impressed that over the two weeks that I waited and watched I never saw the female leave the nest.  On May 23rd I got a message from Simone that there appeared to be activity at the nest. When I arrived all the eggs had hatched but the shells were still in the nest indicating that the cygnets were still only a few hours old. There were eight cygnets and all appeared healthy. But they were not white. Five were predominantly gray and the other three were shades of tan.

It seemed a very short time from being born until the cygnets were given their first swimming lesson. Mom and dad marched them down to the waters edge on the very first day of their lives and calmly waited for them to jump in. It took only a few moments before the first brave soul took the plunge and then the next six quickly followed. But not number eight. This young swan was not sure that water was his friend and took several extra minutes of coaching before he stuck a webbed foot into the pond.

Once they got wet the lessons came quickly. There was a tour of the nest side pond with a few stops for snacks. What surprised me most was a trip downstream from the pond and back again.

There is a small rock dam in the stream that created the pond behind it. The water behind the dam is calm but the water going over the rocks and into the stream is quite fast. The trip downstream was easy but the the swim back to the pond and the nest was a challenge. Mom and dad cut the kids no slack at all. The adults swam upstream through the little rapids and over the rocks to the pond and waited to see which of the new born would make it. The little guys paddled their tail feathers off. They would make headway then get caught up in the current and get pushed back. I stood on the shore encouraging them to go to the side but doubted that any of these day old cygnets would make it. They all did. It took a while but not one of them quit until they got to the pond. I felt like a wimp. 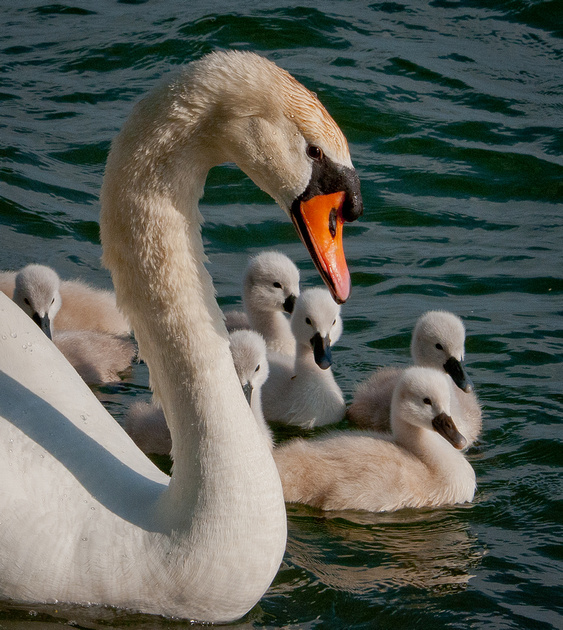 One week later, June 1st, I got back to check the family progress. The cygnets seemed like they had doubled in size and quadrupled in confidence. They accompanied the adults out on the big lakes to feed and showed no fear of venturing away from mom and dad to forage on their own. The cygnets were still little fluff balls but they had already adopted an air of dignity and grace. This was all bad news for me. During the nesting period I had been able to get close to observe and photograph. Now the family was free of the nest and could travel anywhere on the ranch, even upstream to the neighboring properties. I would need to wait for the family to forage along one of the sections of lakeshore in order to get close enough to get good photos.

After only two more weeks (June 15th) the cygnets had made another large jump in size and appeared a bit awkward. They had entered a pre-adolescent "ugly duckling" stage. 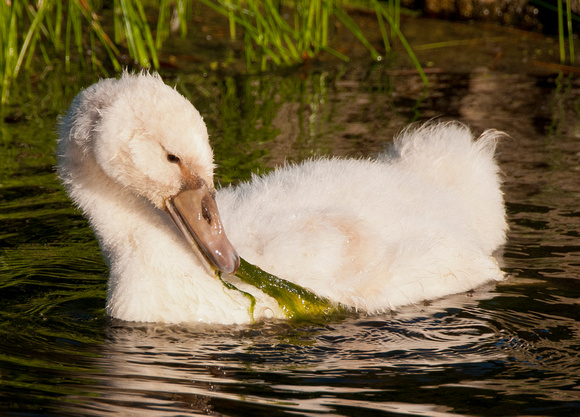 Like human teenagers, the focus was on feeding the incredible growth required to get them ready to fly south for the winter. Although they spent almost every waking hour feeding, it appeared that the family needed to spend a certain amount of time on shore to let the cygnets dry out and get warm. The young swans were still fluff balls and didn't yet have the full set of waterproof feathers.Sadly, one of the gray cygnets was missing from the family. I found the body floating in the pond near the nest but there was no sign of what might have killed it.

When I returned on June 24th the cygnet count was still at seven. On this visit I could not see any obvious changes to the size or coloration of the cygnets.

It was August 5th before I got back to the lakes. The transformation was significant. Feathers were replacing the fluff and the cygnets were nearly half the size of the adults. I know swans are powerful swimmers but I was still impressed by the size and development of the feet and legs. Mute Swans have huge feet! The end of summer was rapidly approaching and I had not seen any of the young swans trying to fly. In fact, their wings still looked totally undeveloped. I was also surprised that the feathers weren't white. I expected the colored cygnet fluff to be replaced by adult coloration. It was also notable that the tan/white cygnets bills were deveolping an orange coloration but the gray/white bird's bills remained gray. During my absence we had lost another gray cygnet so the family was now only eight. 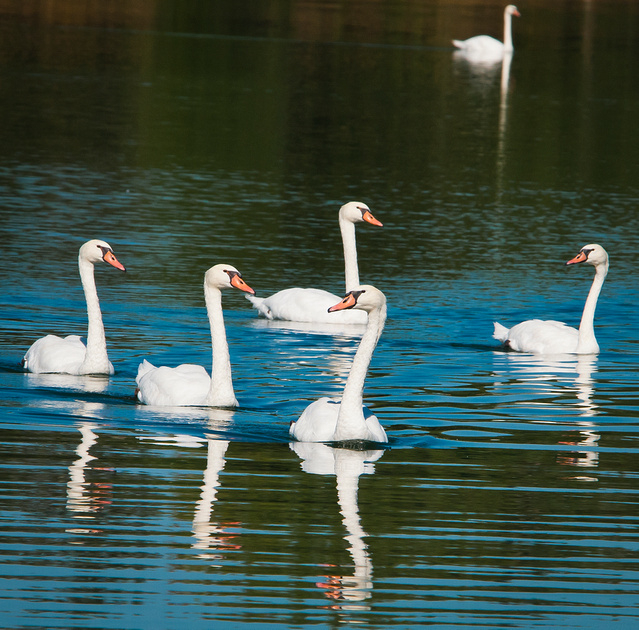 On August 24th (and subsequent visits) I found the lakes populated with 7 to 15 other swans. Most looked like yearlings because they were not yet the size of the mature resident adults and their bills still had not fully turned bright orange. It was only a guess, but I imagined these visitors were prior year cygnets. Every time I visited the lakes I had hoped to see the swans airborn but it very rarely happened. The young visitors did reward me with one late evening fly-by to keep me motivated. 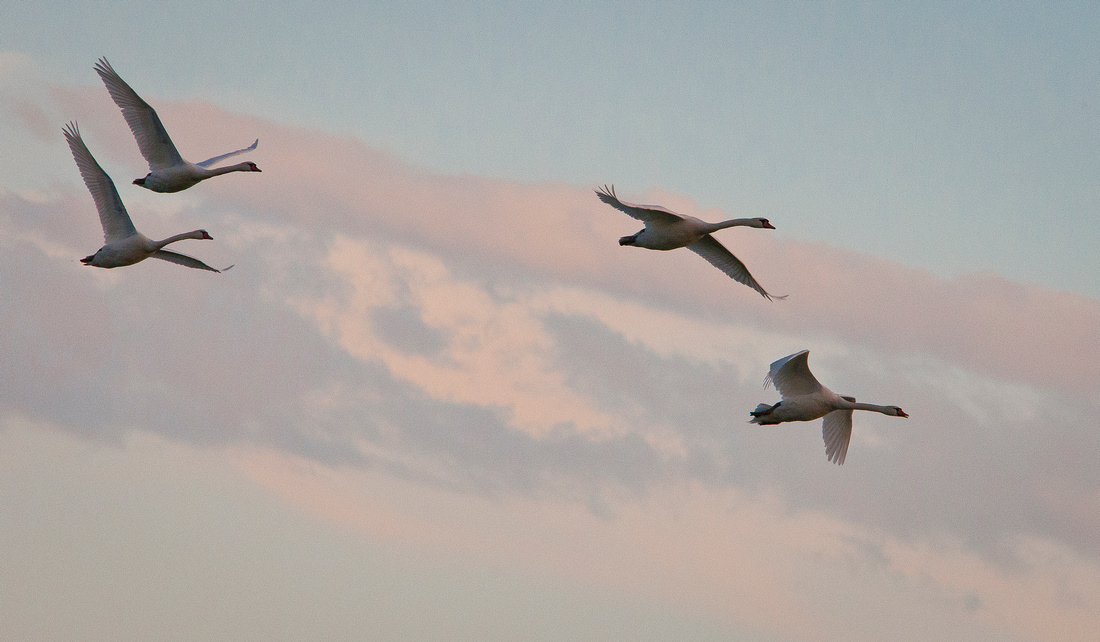 Typically the swans would fly south for the winter but Ron and Simone reported the big birds were still in town and stopping by regularly to feed. Maybe it was because Boise was having a very mild winter, or possibly because the 2011 cygnets developed late and were not up to the trip. Remember, these are not swan facts, simply observations. 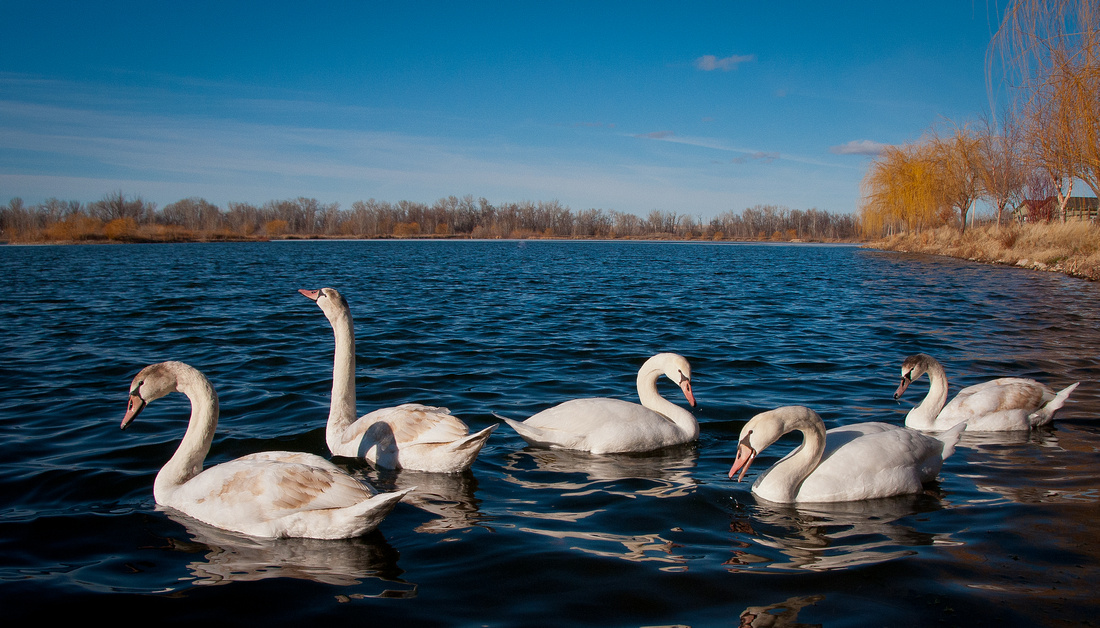 When I visited on 11-10, 12-21 and 1-7-2012 there were swans. The bulk of the 2011 family was still travelling as a group but I never saw more than 5 of the cygnets at one time. There were also regular visits to Three Rivers Ranch by prior years offspring (?) or other swan relatives.

The young birds were easy to spot because they still had not shed all of their colored feathers. Because they were somewhat independent and now flew to other locations it was possile that one had found a boyfriend and eloped. I never got to see the 2011 crop of cygnets fly so I have no idea what their underwing coloring would look like.

The new 2012 nesting season started for me on 3-23. I found the two adults swimming and feeding together and none of the kids were anywhere to be seen. Swans regularly chase the cygnets out of the nesting area as soon as they are able to fly and forage for themselves. It was mating season and mom and dad didn't want kids around to spoil the mood. On subsequent visits (4-1 and 4-29) it became obvious that the happy couple was going to use the nest from the prior year. By the 29th there were six eggs in the nest and the male had adopted his hyper-defensive "Sumo Duck" attitude. Any creature that got close to the nesting pond was subject to attack. 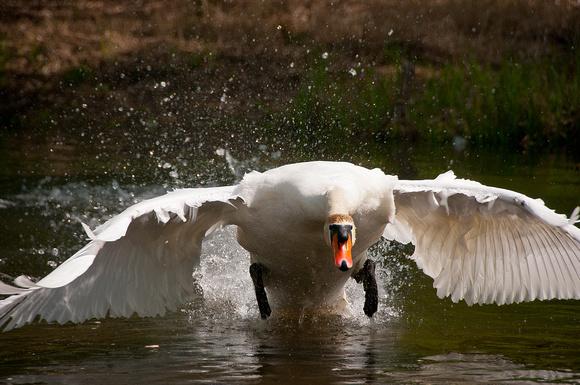 It was strictly coincidence that my next visit was 5-10-2012, exactly one year after my first visit to the nesting area. Deja Vu! The only difference was two less eggs. But now the hatch watch has started for this years crop. Updates to follow!! 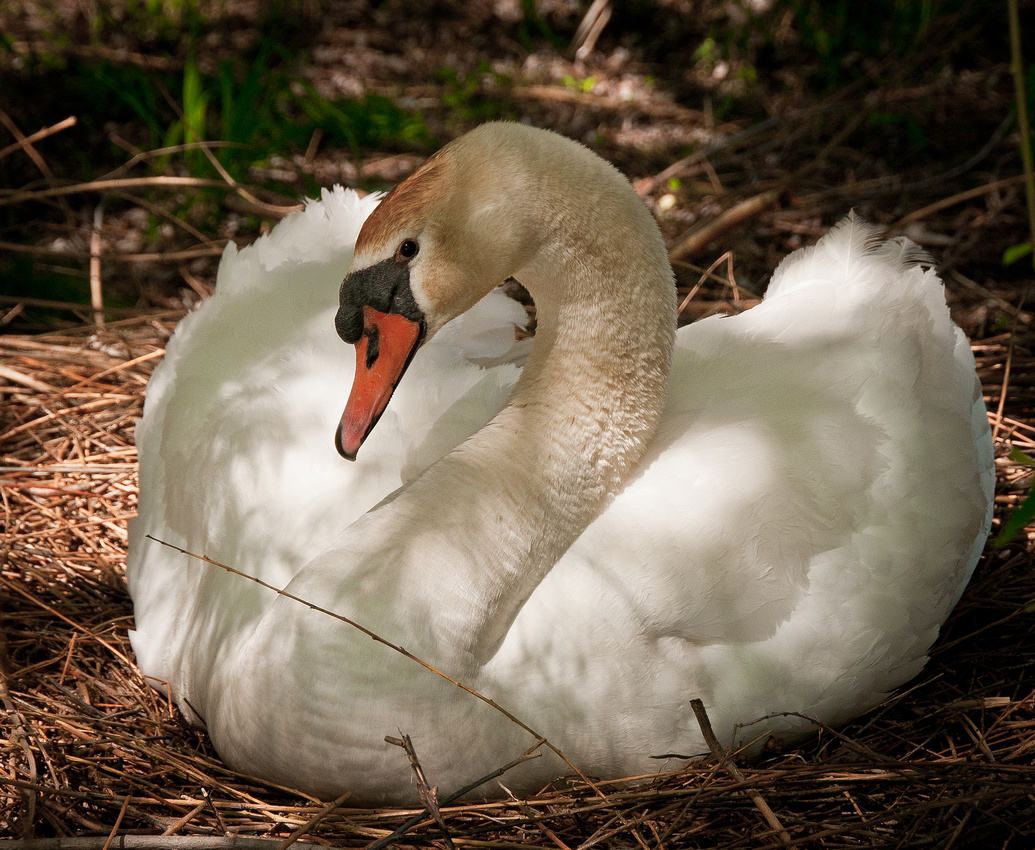 If you would like to see more images, please visit "The Swans of Eagle" gallery.