Thank you for your patience while we retrieve your images.

Created 26-Dec-17
60 photos
The American Cowboy. Subject of tales of legendary exploits and adventures, living out on the open range in America's wild west. Fueled and romanticized by hundreds of movies, books and TV shows, the six gun toting, horseback mounted image is recognized worldwide.
I now live in Idaho which is an "open-range" state; cattle country; livestock have the right of way. So, if there is open range, and free range cows, there must be cowboys; right? I set out to try to find some modern day cowboys who would let me photograph their life on the ranch. Turns out most round ups are motorized and use a variety of power equipment from helicopters to 4 wheelers to gather up their herds. But a local friend and rancher told me about another rancher in the area who still did his Spring round up the "old-fashion" way. I got permission to watch and photograph the process, which turned out to be a blend of old timey roping, branding and neutering combined with inoculations for disease control and tagging for identification and tracking. I spent two days watching as the modern cowboys AND cowgirls quickly and efficiently rounded up and processed all the new calves. The old days of driving large herds great distances across open prairie are over. Today herds live on open grazing land and the ranchers go to them. When it is time to go to market, trucks come and take the cows away.
The round up process I witnessed went something like this. The rancher had cattle grazing on several different areas of his large ranch. On round up day he and his crew built a temporary corral in one of the main grazing areas. At first light the cowboys and cowgirls would saddle up and go out on the range to drive the herd back and into the corral. The herd consists of only momma cows and young calves. Their are no mature bulls living with the herd. The cows and calves are pretty much inseparable so all are driven into the corral together even though only the calves will receive treatment. There are two work stations set up at one end of the corral and most of the cows huddle together at the other end of the corral. Once the work stations are operational, mounted cowboys ride into the herd and start roping calves. To my untrained eye this step requires the most skill. The cowboys must ride into a tightly packed herd and find an unbranded calf. They must then rope the calf by it's back legs only. I watched this process for two days and I still don't know how they accomplish this. The horse and cowboy work as a team. Once a calf is roped the cowboy quickly secures the rope to his saddle horn. He and the horse then tighten the rope in an action that is similar to a fisherman setting a hook. Once hooked, the horse and cowboy keep tension on the rope and drag the calf to one of the work stations.
What I am calling "work stations" is where all the action is. Here the calves meet the guys that I think have the toughest job on the team. I'll call them the "calf wrestlers". When the calves are dragged in, only their back legs are restrained. For everyone's protection the front legs must also be restrained so the calf wrestlers need to rush in and grab the calves (sometimes wildly thrashing) front legs and tie them with a rope connected to a post driven into the ground. The horse and cowboy then take out the slack and gently stretch the calf between the post in the ground and the saddle horn. This step requires a really well trained horse.
Once the calf is fully restrained a group of cow persons descend on it likes mosquitoes. Each person has a job to do. Usually the cowgirls give the calves a group of inoculations. If the calf is male, it is neutered and de-horned. If they are to be tagged, here is where they get their ears pierced. Some are marked by having part of one ear removed. All are branded. The momma cows are surprisingly docile throughout this process. Some stay close and keep an eye on their babies but most simply stay with the herd .... been there, done that.
The second day was much like the first. The corral was set up in a different area where the cattle were already inside a fenced range. Other than that, the steps were virtually the same. The images are presented in chronological order and follow the written description you have just read. I have divided the photos into a two day sequence to avoid redundancy. This gallery is more of a documentary than an exercise at photo art and some of the images are a bit graphic. Some of the steps appear to be painful so give careful thought as to whether or not this gallery is for you. For best first time viewing I suggest the "slideshow" version set to full screen 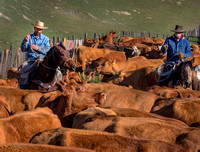 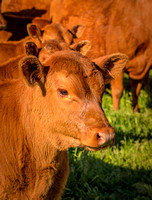 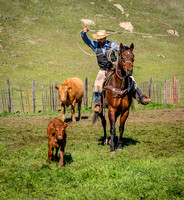