Thank you for your patience while we retrieve your images.

Created 10-Oct-17
52 photos
This is the more "human" gallery, and as such it is not about photography, but more about the experience. Sadly, I didn't realize that my friends and family might want to see what the trip was like until I got home and listened to the questions they asked. So, after the fact, I needed to try to gather up images that shared the food, shelter and shopping aspects of the trip. What you will see are cell phone photos, some mine and some borrowed from other travelers, and photos I took so others on the trip could show their friends and family the hardships we endured each day.
The lodging in Johannesburg was excellent both on arrival and departure. On arrival I spent 2 nights in a lavish old private residence that had recently been converted to a boutique/spa. On the way out I spent 1 night in a casino/lodging/lifestyle shopping complex worthy of the Las Vegas strip. Once we left J'burg we spent most of our time in small game lodges on private game reserves. Each provided all the creature comforts (except TV, and Wi-Fi only in certain areas of the main lodge) while snuggled into the local habitat among the creatures we came to visit.
For transit from locale to locale we had a modern, 70 passenger Mercedes bus for only 20 travelers. The bus was programmed to stop at rest areas that supported local artisans. Twice we took short flights while the driver hustled the bus between locations. Our 20 traveler group included one South African naturalist/guide and two American Escorts (one a doctor of wildlife biology).
Daily game drives were done in fairly open Range Rover type vehicles. Each bush vehicle came with a very well educated local guide. It was very common that the guides, and most other locals we met, spoke English, Afrikaans and between 6 and 9 tribal languages. I didn't learn one new word, so you know where that puts me!
A typical day in the bush involved heading out for the morning game drive at sunrise (6 AM). Most of the herd animals were ignored as we searched for lions or leopards. We would stop in the bush for coffee/hot cocoa and rusks, then back to looking for any interesting targets of opportunity. Late morning we went back to the lodge for mid-day meals and relaxation, then back out for an evening game drive at 3 PM. We would stay out in the bush until time to unpack the "sunsetter" refreshment in the bush (every vehicle was stocked with liquor and snacks). The trip back to the lodge was usually done in the dark ... and it gets really dark out there! (I saw the most beautiful Milky Way I have ever seen over Zululand, South Africa)
We were well fed with both local and traditional dishes everywhere we stayed. On our last night at game lodges where we spent multiple days we were treated to very nice buffet meals out in the bush or in protected areas away from the lodge. The natives prepared and served the food and then put on shows of native music and dancing that was quite well done. 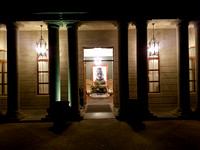 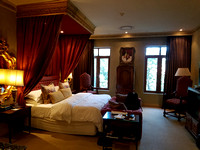 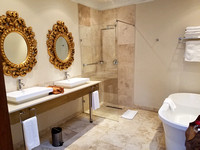 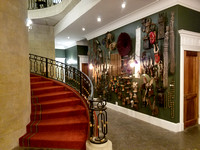 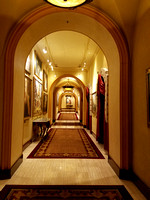 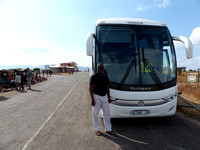 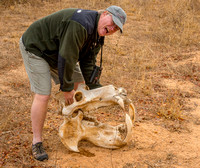 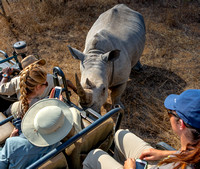 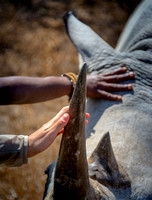 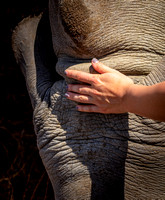 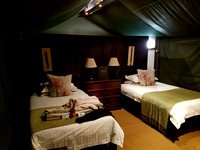 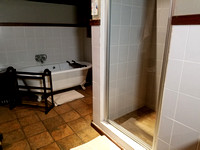 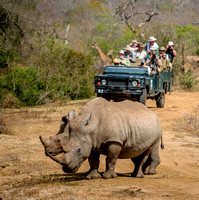 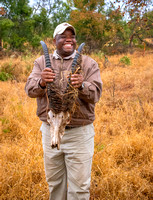