Over the years that I have had this web site I have had the good fortune to have received a variety of awards for images entered in exhibitions, contests and competitions. The original web page "Award Winning Images" was created to allow visitors to my site to see all of these images, along with an explanation of what awards each image received, in one place. Then, one evening as I was adding an image to the page, I got a pop-up saying that I had reached the maximum size for the page and no more images could be added. Well, Darn! So, I needed to create a new page. I decided to split the Wildlife images from all the rest of the award winners. This page presents the award winning photos without critters. If you haven't already seen it, you can see all the AWARD WINNING MAGES/WILDLIFE at this link. This "Flying Kayak" has won awards as a color image, an "altered reality" image and now as a monochrome.  It won an Award of Merit from the

Columbia Council of Camera Clubs in the Fall 2021 competition. 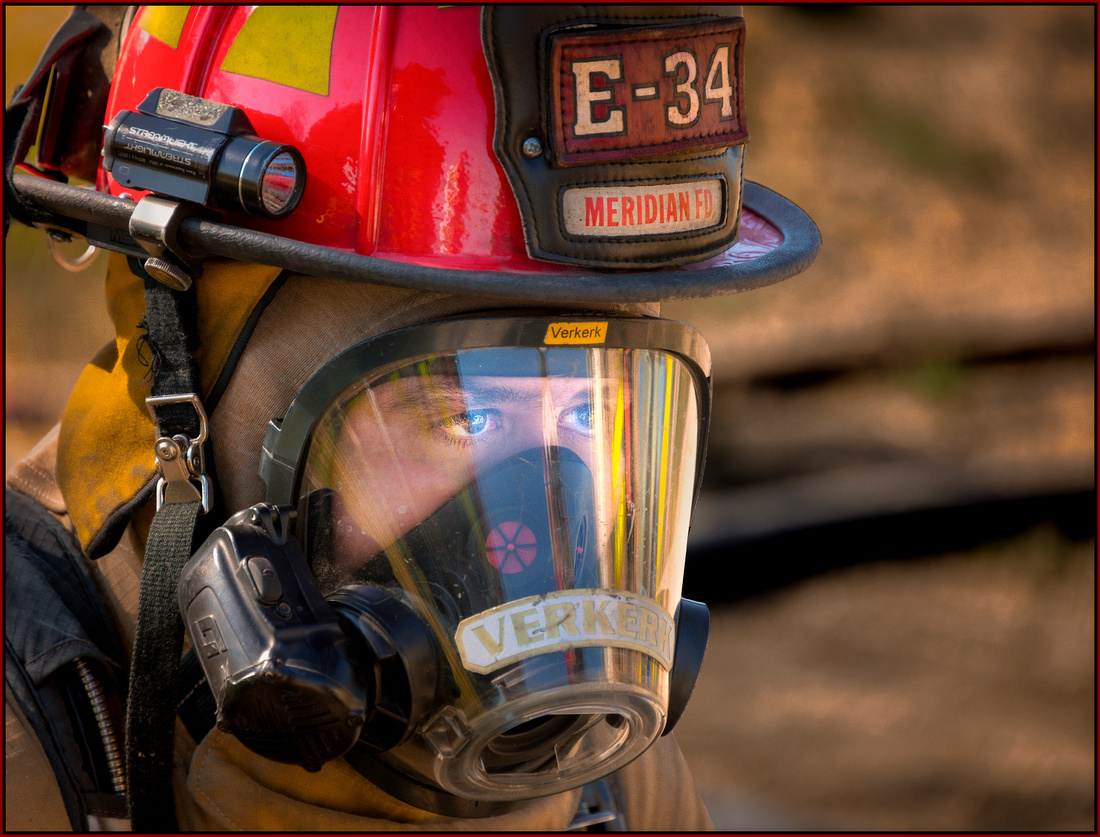 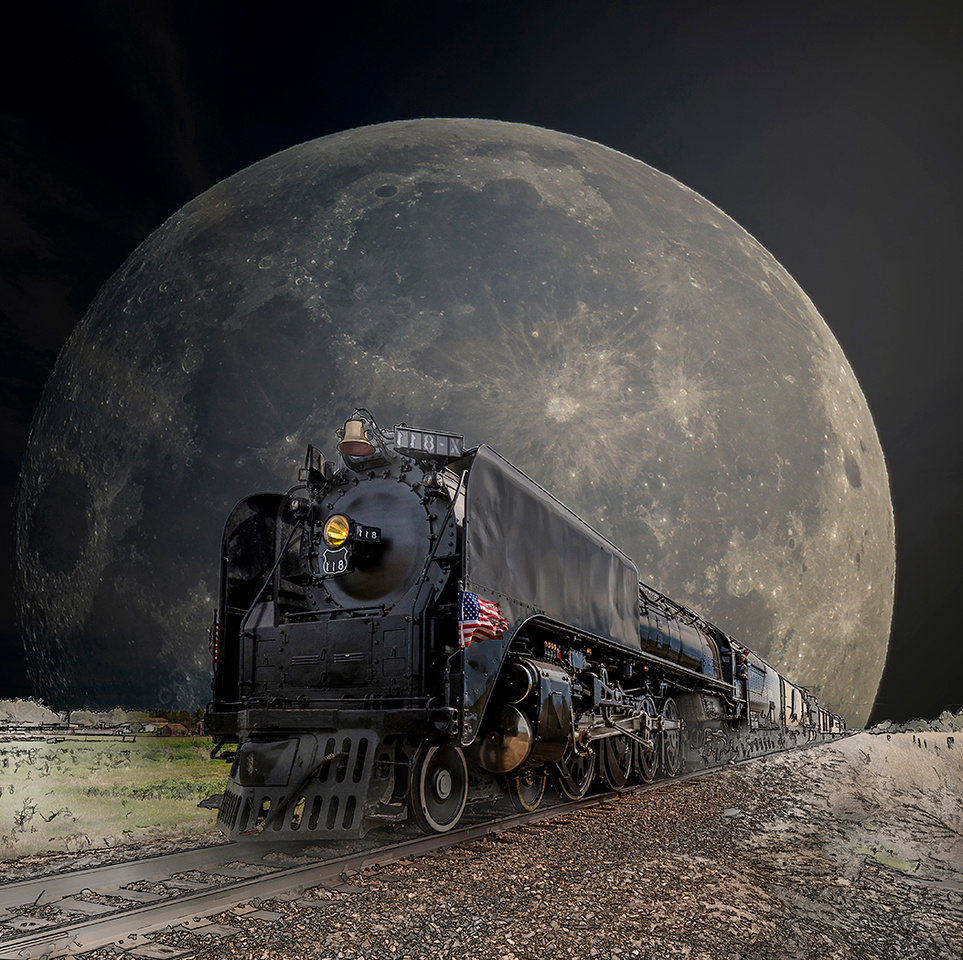 The "Moonlight Special" got an "Award of Merit" in the Creative category of the Winter 2021 Columbia Council of Camera Clubs QEID competition. This is one of my first experiments with a technique known as "Reduction Art". I hope to add more examples soon.

Later that year the Moonlight Special was re-judged against all the other award winning images in the Creative category and earned Second Place. 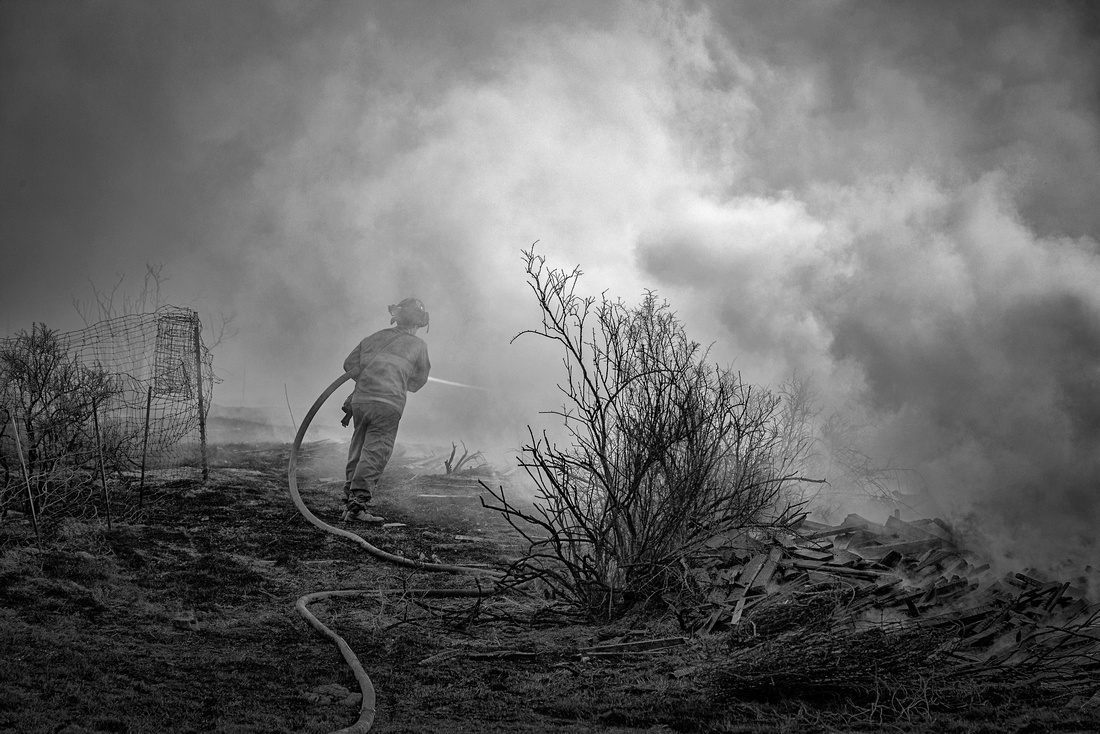 I was searching for Sandhill Cranes near Roswell, Idaho when I saw a lot of smoke in the air. This area is rural farm country so firefighting help is hard to find. I followed the smoke and got this image of "The Volunteer" which won First Place in the 2016 Boise Camera Cub End Of Year Sports and Action category and received an Award of Merit from the Columbia Council of Camera Clubs Spring 2016 Monochrome competition. It also earned a First Place award in the Professional "Pictorial" category as well as the "Paul Pulley's Idaho Arts Vision Award" at the 2016 Western Idaho Fair. One of the true adrenaline sports that is very popular in Idaho is white water rafting and kayaking. I went to the Class V rapids on the North Fork of the Payette River for the 20113 "North Fork Championship". This event brings world class kayakers to Idaho for a 3 day event. One version of this image was titled "Champagne Cruise" which tied for high score in the Creative category of the Summer 2013 QEID competition of the Columbia Council of Camera Clubs and won an Award of Merit. This version got an Honorable Mention in the Idaho Statesman 2013 Outdoor Idaho Photo Contest as well as First Place in the "Sports and Action" category at the 2014 Western Idaho Fair.

"DON", the old prospector's image, got an Award Of Merit from the Columbia Council of Camera Clubs Winter 2015 individual electronic image competition as well as an Honorable Mention at the 2015 Boise Camera Club Annual Awards competition, Portrait Category. This image received a "Best of Show Surprise Award" as well as a Second Place in Monochrome Portraits at the 2015 Western Idaho Fair. 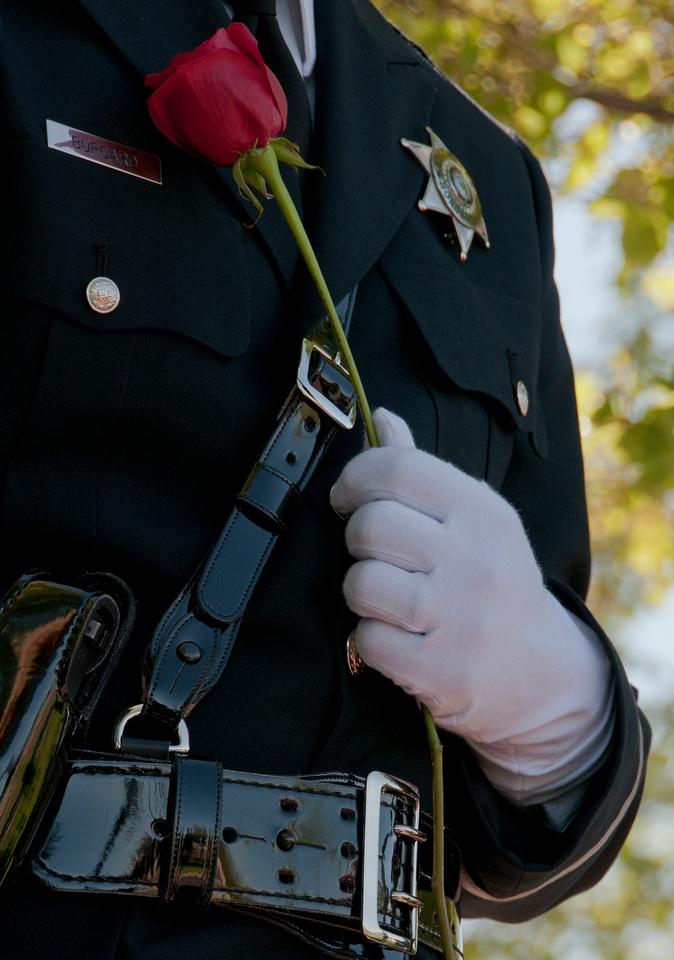 Each year Idaho recognizes peace officers killed in the line of duty at The Peace Officer's Memorial. In 2011 I volunteered to fill in for a friend from The Boise Camera Club who normally shoots the event. "Remembrance Rose" is one of the images from that day and it won "Second Place - Protectors of America" at the 2011 Western Idaho Fair. 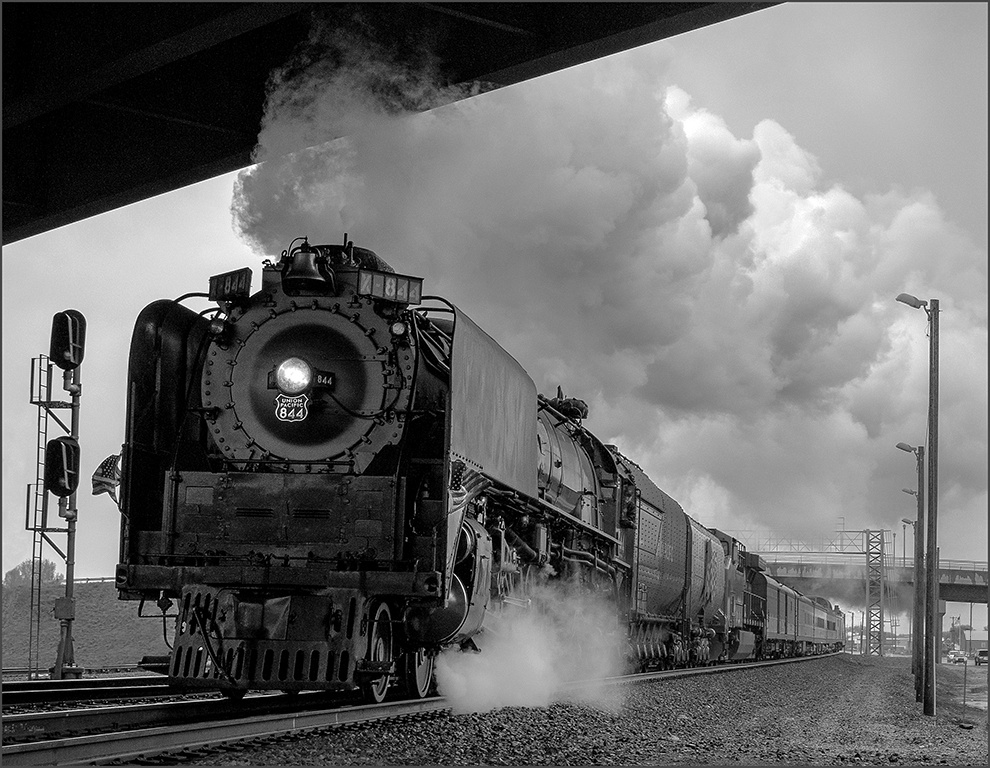 This "Powerful Visitor" earned an Award of Merit in the monochrome class of the 2017 summer Columbia Council of Camera Clubs individual competition. This is a rare phenomenon known as a "Fog Bow" (check it out on Google). It occurs when the sun passes through a fog bank at a specific angle, just like a rainbow. The "Fog Bow" got an Honorable Mention from "Outdoor Idaho" in the August 2015 "Iconic Idaho" photo contest. Idaho winters often include a phenomena known as "hoarfrost". "Winter at Wilson Ponds" shows the effects of hoarfrost and earned an Honorable Mention in the 2016 Outdoor Idaho photo contest. 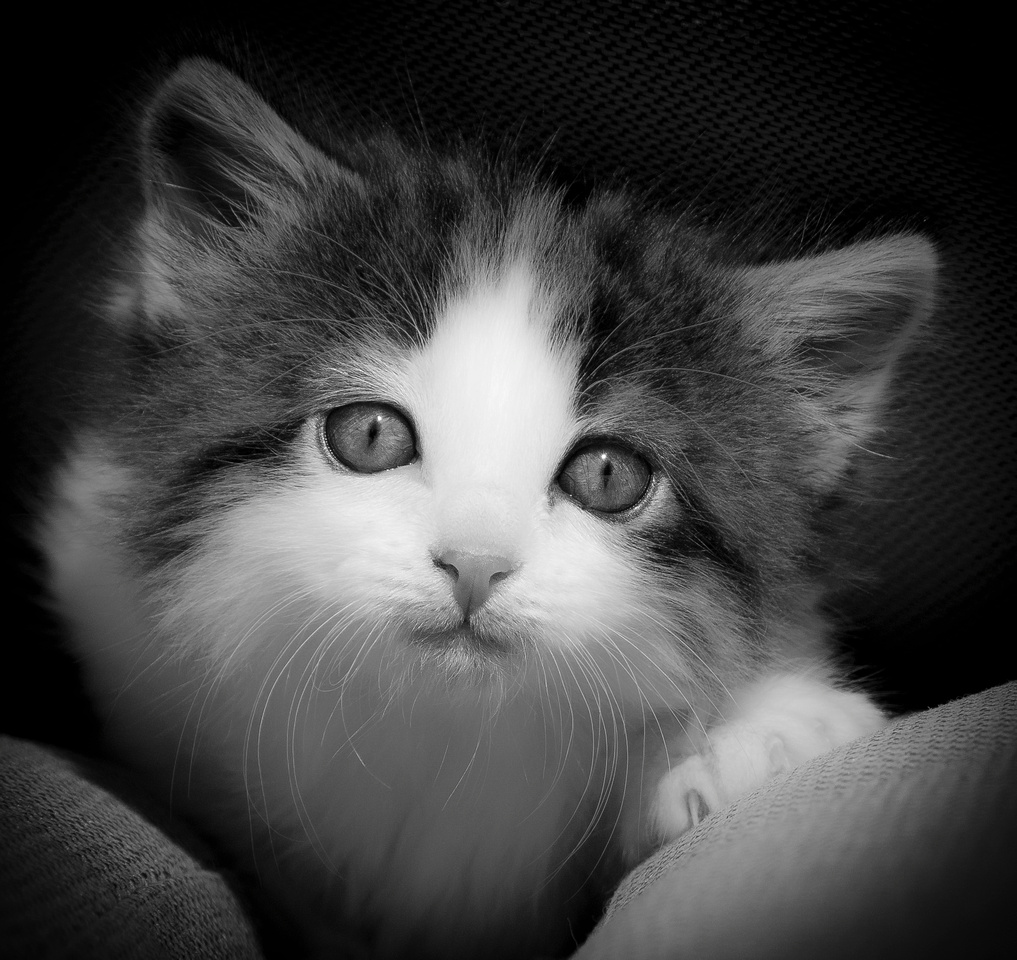 A stray cat had three kittens on our back patio. We named this one KC. The image won First Place the Boise Camera Club End of Year monochrome competition for 2012 as well as 2012 Projected Image of the Year in the Monochrome Category. There is an international event known as the Scott Kelby Worldwide Photowalk. In 2013 there were  28,351 photographers out on the same evening for a period of about 6 hours. All images submitted had to be taken during those hours and they could not be composites of more than one image. The winning image was from Cowloon, Hong Kong. My image did not get recognized in the Kelby event, but the Photographic Society of America gave "Flare" an Award of Merit for January, 2014 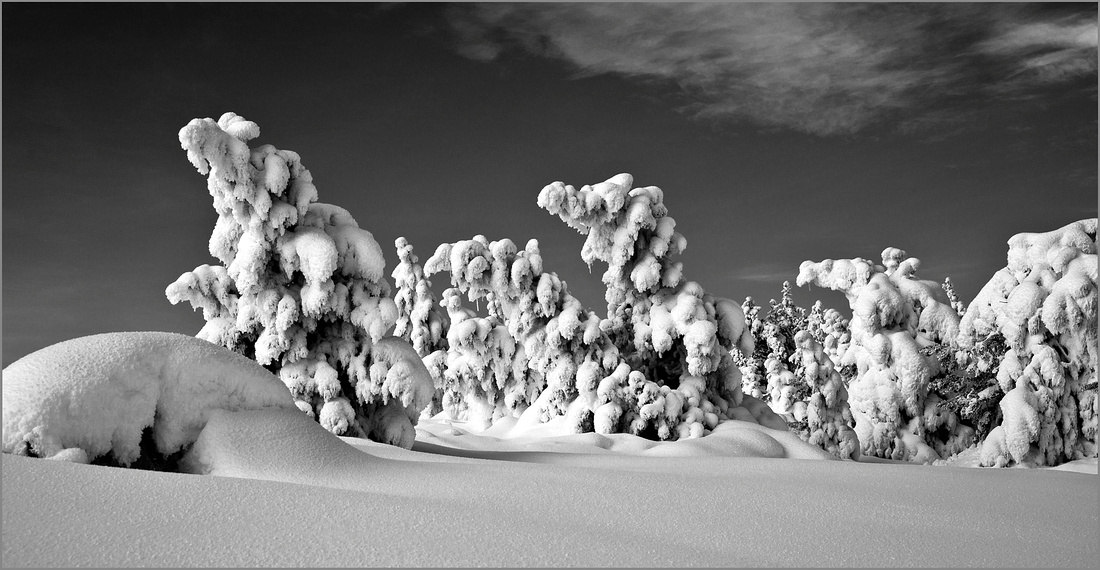 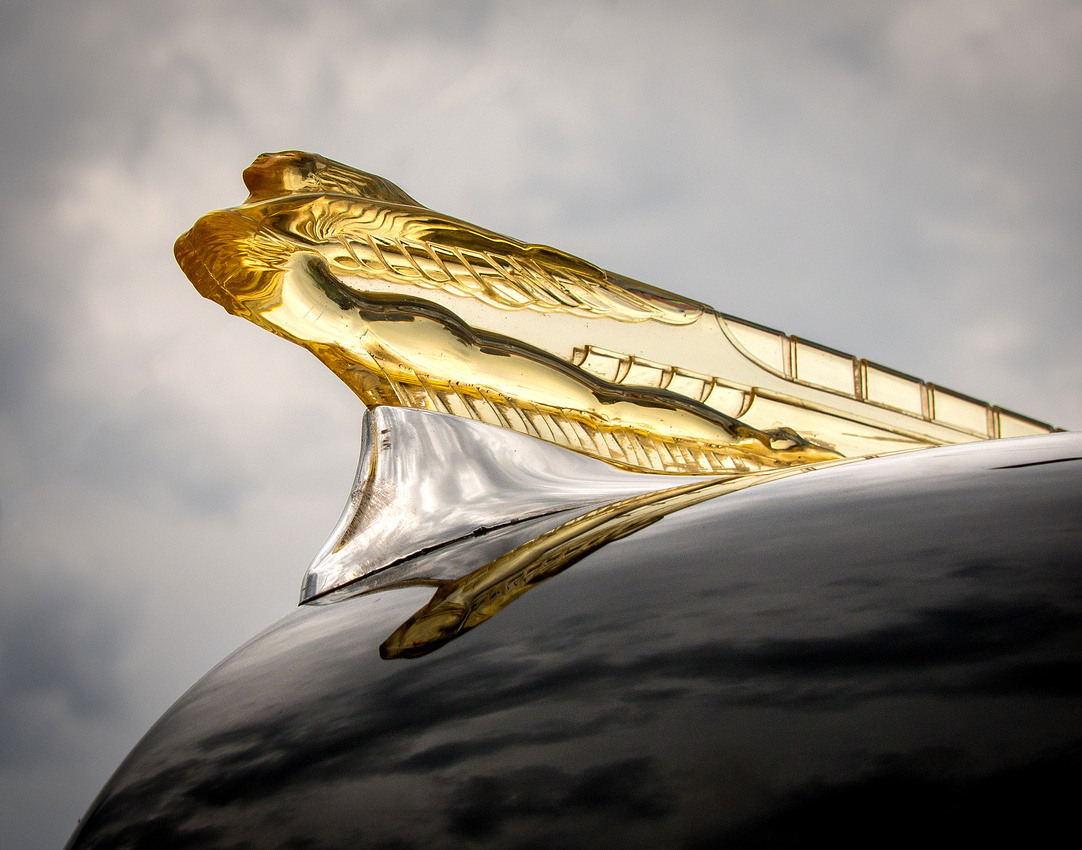 "Amber Lady" got a Second Place award in the "Planes, Trains and Automobiles" category at the 2014 Western Idaho Fair. 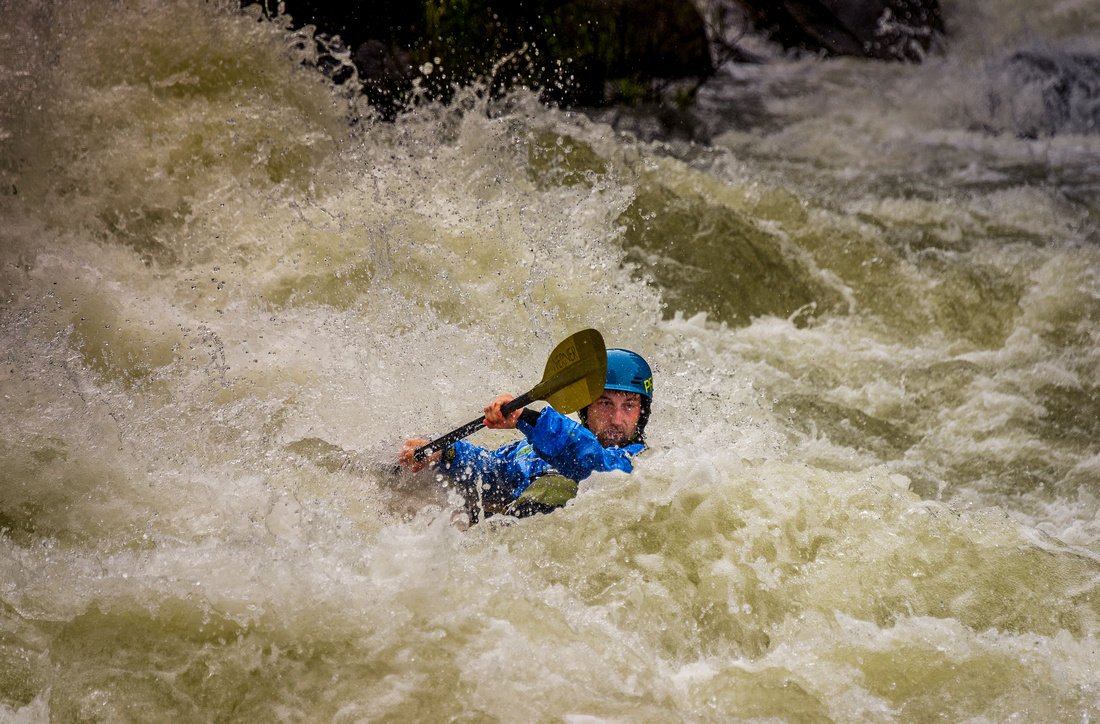 "Up the Creek With Only a Paddle" illustrates how epic the Idaho rivers were this Spring. The image got a Third Place in the Action category of the Professional Division of the 2017 W Idaho Fair.

My wife's kitchen is an artistic chicken coop. She has rooster art everywhere. Four of her favorite wall hangings faded with age and she wanted new art to replace them. "Monet Chicken" is an effort to make a photograph look like a painting. This image is one of the replacements and it received an Award of Merit from the Columbia Council of Camera Clubs Creative Division in Summer of 2015. 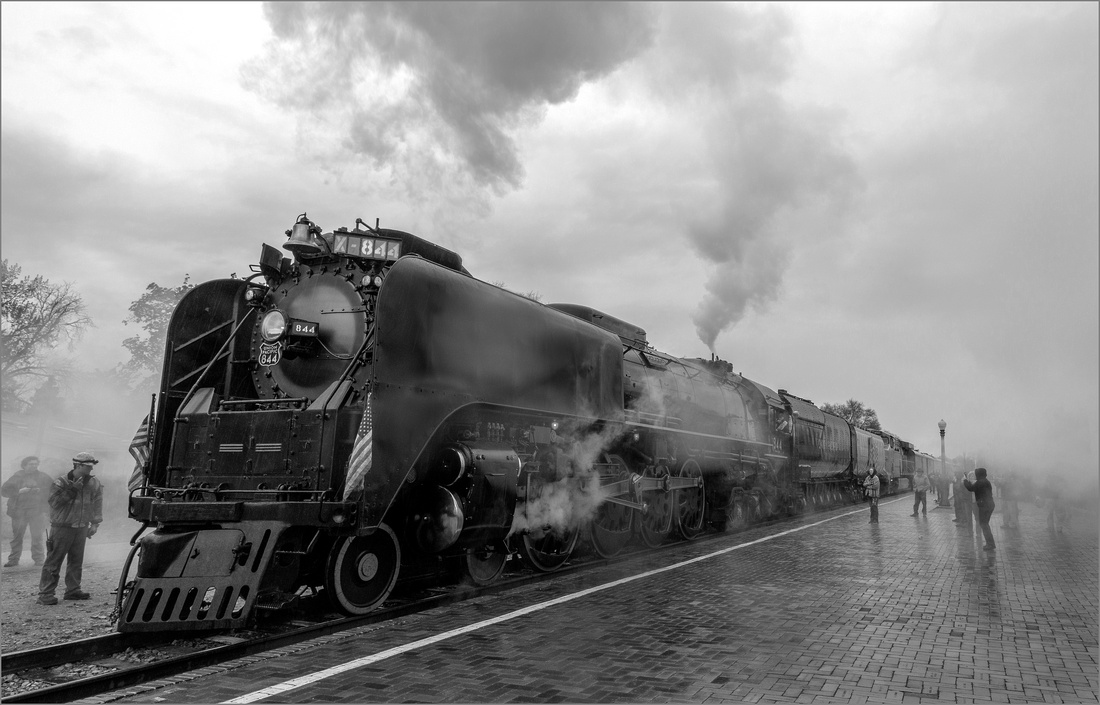 Union Pacific sent #844 from Cheyenne to Boise for a celebration to honor the 82nd birthday of the Boise depot. 844 is the last steam engine ordered by Union Pacific and it was powerful enough to earn an Award of Merit from the Columbia Council of Camera Clubs in Spring of 2017. 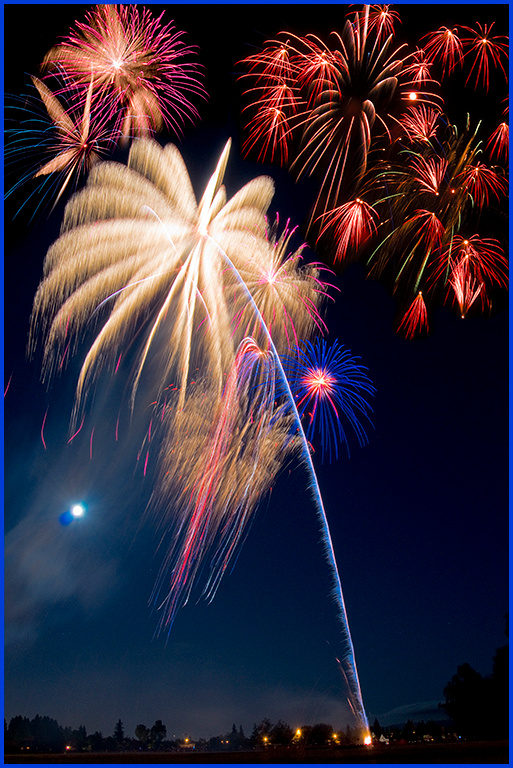 Fourth of July in Sonoma was the source for "Small Town 4th of July" that won "First Place" in the Pictorial Division of the Boise Camera Club 2011 Year End Awards. 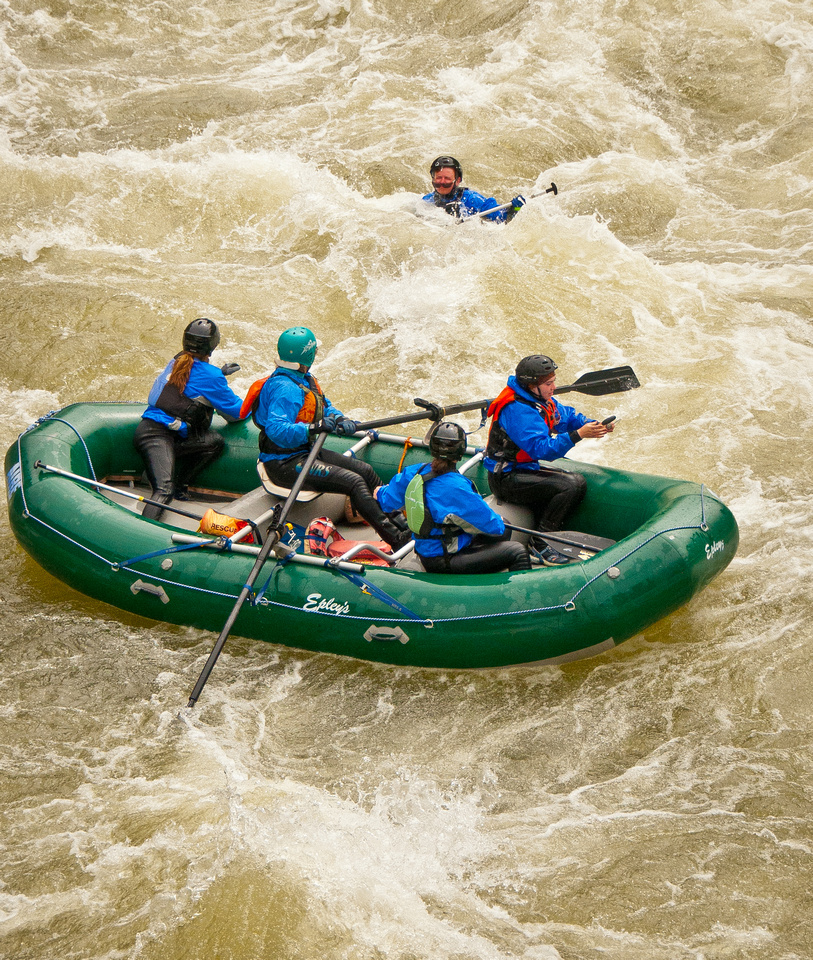 This is image number 7 in an 18 shot sequence of a whitewater rafter going overboard in some rapids on the Salmon River in Idaho. The photo got an Honorable Mention in the 2012 Idaho Statesman Outdoor Photo Contest. I especially like the left front paddler checking her smartphone image while the guy in the water tries to keep from drowning. On May 15, 2012 photographers in over 160 countries participated in a 24 hour coordinated photographic event created by Stockholm based non-profit group "Expressions of Humankind". Over 100,000 photos of daily life around the world were submitted by amateur and professional photographers (each photographer was limited to a maximum of 10 images taken that day). One of my photos was selected for the organizations preview page at www.aday.org (not there anymore) and was the only U.S. photo used in a two page spread by "The Independent", an English national newspaper. I have no idea where else it may have been used as I never got a copy of the book.